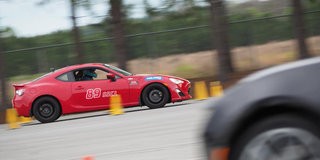 The Tire Rack SCCA® Solo® Championship Tour season splashed down for its event of 2019 at the South Georgia Motorsports Park in Adel, GA. The Tire Rack Dixie Championship Tour is always known as a hospitable event with BBQ and fast, fun courses.  Rain moistened the Sunday morning course, but not the fun.  Even for an uncharacteristically cold Dixie, everyone had a great time and the socializing in the pits and the picnic areas were the highlight of the event

As has been tradition for the past few years, all the ladies class competitors ran in a heat together so that an overall ladies’ PAX winner could be fairly crowned (since conditions varies greatly over heats.) From BSL, Kristen Rosenthal took the honor of Fastest Indexed Lady in a Chevrolet Camaro SS 1LE.

Starting its second year, the excitement around the Solo Spec Coupe class hasn’t waned.  SSC and SSCL had some Saturday night car fixing antics as the Scion FR-S owned by Kristen Rosenthal, driven by Bryan Heitkotter and Teddie Alexandrova, appeared in Sunday’s grid with fresh Falken Tires borrowed from Steve Rife. They’d run Saturday on a set that’d been purchased at the start of and run throughout the 2018 season. With some fresh rubber mounted up, and an emergency alignment performed with the help of Tom Kring, Heitkotter took the SSC victory by 0.051 second over Adam Benaway. Alexandrova closed the gap to Tonda Lawson in SSCL, but settled for second position, 1.350 seconds back.

The early Sunday heats were all about smooth wet driving and AWD as rain fell.  Mike King, co-driving Michael Greiner’s Ford Focus RS, put down a first run that was about two seconds ahead of anyone else for the day in D Street thus far. He proceeded to find nearly another two seconds to take a 1.324-second win over Brian Priebe in a Subaru BR-Z.

There was a lot of attention drawn to the B Street grid, but not for the normal reasons. Tom DeYoung and Dean Rhodes brought a Tesla Model 3, which handled the wet conditions gracefully and the drivers happily answered a lot of questions about the car.  Ultimately, DeYoung was able to squeeze out a fourth-place trophy behind David Marcus, Ian Stewart and Greg Shumaker. Terry Tabor claimed the fifth and final trophy position.

E Street provided excitement as Matt Glagola, known for his SSP Lotus, jumped into Sean Minehart’s Toyota MR2. Trevor Renson led after day 1, but it was Glagola using the mid-engine advantage to the fullest to take the win on Sunday by 0.842 second. Minehart finished another 0.197 second back in third with the Mazda Miatas of Buckie Maxey and Kerry Coughlin claiming the fourth and fifth trophies respectively.

The SCCA Solo community has always been great about supporting each other and helping out when competitors are in need.  Just days before the event, Ash Gravely was without a car to drive, but with the help of Dave Whitworth at Solo Performance Specialities, Gravely was able to get his own BMW M5 prepped with new Bridgestone Tires drop shipped from Tire Rack to the event site, where Cortland Bailey took delivery of them. With this help, Gravely was able to claim the third trophy spot in Street Touring Extreme behind Jason Stroud and Joseph Banks.  Justin Tilus claimed the fourth and final trophy position with all four trophy positions being separated by just over a second.  To return the kindness, Gravely was also able to help out Caitlin and Nick Dunlap with a shared hotel room after theirs was cancelled late 9pm Friday night. He’d had a spare bed since his original co-driver cancelled. Sometimes, everything just works out.